It happened last fall.  My life was wrecked…in a very good way…by my first mission trip. I traveled to Uganda with a wonderful team of people to serve at one of the amazing Watoto Children’s Villages (www.watoto.com)…this one in northern Uganda in an area which had been terrorized  for many years by the evil Joseph Kony and his despicable “Lord’s Resistance Army.”

A teammate and I began our visit by spending several hours with the staff doctor in Watoto’s beautiful new health clinic. It was spotlessly clean…and empty. There was a large room for an infirmary, but it contained no beds. We asked the doctor why the infirmary was empty and he said that beds had not been acquired due to lack of funding. So the clinic was being used to see sick children and staff, but the sick children  were then sent back to the small homes where they lived with six or seven other orphans and their housemother. Undoubtedly, illnesses could easily spread in such close quarters.

I took pictures of the empty space, committing to pray for God to “somehow” fill that need. How spiritual of me! Time and time again on that trip, I was reminded of the excesses we consider  to be “normal” in America, and the simplicity with which people live in other parts of the world. What a paradox to see so much joy on the beautiful, redeemed faces of the widows, orphans and staff at Watoto.

We returned from the trip, profoundly impacted, with much to process. We shared our photographs, and continued to grapple with all that we had experienced. The faces and the scenes of Uganda kept running through my mind…including the memories of that empty infirmary.

Fast forward just six weeks. I learned that the nine year old nephew of our team leaders had seen the pictures of the empty infirmary. He had asked the same question that I did: “why are there no beds?” But when he heard the answer, he didn’t just say “oh, how sad. I’ll pray about it.” He did something!

Rhodes Jackson, a third-grader,  took the initiative to contact family and friends and to raise awareness about Watoto and their need for hospital beds. He found out what each bed would cost ($268) and how many beds the infirmary would hold. (10). Then, he started asking for donations to pay for those beds.  Within just a few weeks, a nine year old had raised more than $4,000 to pay for 10 hospital beds and for children’s books for the village’s limited library!

What an amazing picture of childlike faith.

This precious nine year old taught me a lot. Hopefully, a few of these lessons will speak to you, too:

Love does.  After being awe struck by Rhodes’ initiative, I realized how often I have used prayer to excuse my complacency.  Yes, prayer is vitally important. But so is action! I want my faith to be vibrant. And that equates to moving outside of my comfort zone and actually doing something to help other people. The book Love Does by Bob Goff (www.bobgoff.com) has been a great inspiration to me. Please read it.

Perfectionism produces paralysis. I often have good intentions. But, more often than not, those good intentions do not translate into action because I am not sure of the next step. I want to do things “right.” And, secretly, I’m probably afraid to try and fail. Instead, I often do nothing other than think about a problem.

Callousness can build around a middle-aged heart.The only calls I ever seem to receive on my archaic home phone are from people asking for money or other donations. There are so many worthy causes out there…so many people in need. It’s easy to put up a protective shield around your heart because you can’t say yes to all of the requests. And sadly, the next step on that path is to grow numb. A byproduct of numbness is inaction, even when seeing a real need where you could make a difference.

The excuse “I don’t want to impose on others” is a cop-out. At least it is for me. Most people have generous hearts. But I’ve learned that responding is much easier than asking. Asking makes me uncomfortable. And after all, isn’t my comfort the ultimate objective? Nope. Not the last time I checked.

What’s the bottom line for someone like me? Is it to wallow in the self-condemnation of being complacent, perfectionistic, callous, and full of excuses? That line of thinking will only yield continued inaction.

We can’t do everything…but we can do something….now. Each of us can make a little difference in the lives of others who are hurting. As Mother Theresa said, we can “do small things with great love.” Listen to your heart. What human situation moves you? Be creative. Do something about it. Try something. Learn from it. Try again. Reach outside the comfortable safety of just serving your own family. And enjoy the process!

Would you share a brave step of childlike faith that you’ve taken? It’s a great way for us to encourage one another. 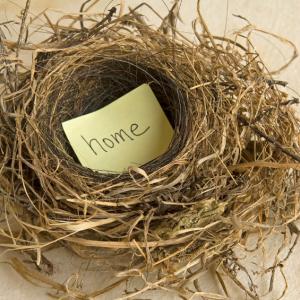 Live Ready
Next Article
Stay in the know!